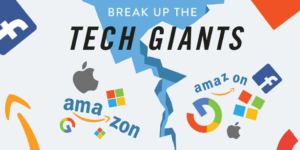 Tech giants and online industry leaders have come under great scrutiny in the past few years, every move seems to be followed by political unrest. But recent changes in legislation have forced the companies to become more creative in their practices while also being more transparent.

Technology giants, like Amazon, Google and Apple have rolled out several new Artificial Intelligence technologies in the past 5 years and are constantly announcing the newest edition of each of these products, but what are we sacrificing when we feed into this phenomenon?

While privacy has been a growing concern, there are more issues behind the scenes. Recently many states have begun investigations into potential anti-competitive behaviors of these tech companies. For example, Facebook has a newly launched dating site. This site has not been proven better or of greater quality, but the fear is that the data collection Facebook uses from profiles and ads, mixed with their intense reach of over a quarter of the population, they will prevent small start-ups from launching and may even diminish the use of current dating apps solely because the Facebook name is so well known and already has widespread use.

Google has also faced scrutiny in this call for revolution. There has been a call for action and investigation by 48 states who are fearful of Google’s influence and dominance. Texas Attorney General noted the company is threating the structure of the economy “as they dominate the buyer side, the seller side, the auction side, and even the video side with YouTube.” Google provides ‘free’ services to consumers, why would they not take advantage of them. The dilemma is these seemingly free services track usage and data to help set prices and influence the supply of goods. Almost 60% of digital advertising is controlled by Google and Facebook. This forces companies who want to advertise online to abide by any terms, conditions, and prices, the two major companies set.

Democratic candidate, Elizabeth Warren, has taken a forward stance on regulating the technology giants, when she “called for breaking up Amazon.com Inc., Facebook Inc. and Alphabet Inc,” and accused the companies of undermining democracy. It is likely that technology companies will come under even more scrutiny and will find themselves at the top of the reform “list” for many candidates in the wake of the coming elections.

Taking a look at these concerns beyond the United States, Europe has also taken great strides to combat the giant technology companies. Europe is known for their strict and expressed rights to privacy which guarantee much more protection to an individual than the implied privacy rights of the United States. The Court of Justice of the European Union, the equivalent of the U.S. Supreme Court, has just ruled that Facebook must take down slanderous and defamatory content from their site and remove all access to that information around the world.

However, Google still brought home a win for tech companies in another case where the court ruled that Europe’s rights cannot be extended beyond the European countries recognizing that individual rights in other countries may not be as expansive.

This court opinion emphasizes the need for regulation of the internet industry and with technology companies alike but also shows the difficulty of regulating companies who have a world-wide reach. When countries around the world have different standards for internet usage it is difficult to find neutral, all-inclusive regulations that will make a difference in practice.

The growing concerns for the dangers of anticompetitive behavior and privacy are not only coming from government perspectives but, Brad Smith, current Microsoft President has recently come out to warn of the dangers that lack of regulation on the tech industry can have on democracy. “If public leaders don’t… the Internet giants will cannibalize the very fabric of this country.”

There is a fine line to be found in these concerns. Does society want the best experience and use of technology, or does it want their right to privacy and fair competition protected? Tech companies have argued that the best way to keep the products to the highest standard and available to all is through the collection of user data. But by consumers use of these products they are consenting to an infringement of privacy. The companies also argue that their wide reach allows them to combat the concerns of misuse because there are clear communication channels between the services.

As the 2020 election approaches, the concerns voiced will only become more prominent. It is evident that anti-competitive behaviors and private data collection will remain at the forefront of political and legislative conversations. It will be interesting to see where many of these investigations go and whether the companies will be able to maneuver to stay steps ahead.

Chris Isidore, Hanna Ziady, A court ordered Facebook to take down a post. The decision could affect social media around the world. CNN Business (Oct. 3, 2019), https://www.cnn.com/2019/10/03/tech/facebook-eu-court/index.html