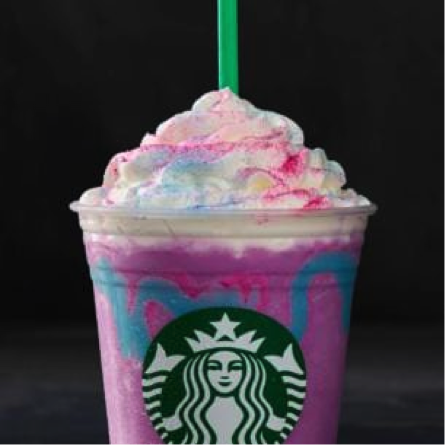 Since the 1971 opening of its first store in Seattle’s historic Pike Place Market, Starbucks Coffee Co. has grown to be one of the largest coffee companies in history, operating more than 24,000 retail stores in over 70 countries across the globe. Earlier this year, Starbucks released its “Unicorn Frappuccino” for a limited time between April 19th and 23rd. As of late, unicorn-themed foods have become increasingly popular across social media platforms, so it is no surprise that Starbucks felt the need to join in on the trend. However, Starbucks was not the first to create a commercially sold unicorn-themed beverage.

The End, a small cafe located in New York City, claims to have been the originators of the unicorn drink social media sensation. The End began selling its “Unicorn Latte” in December 2016, and soon after applied for a trademark in January 2017. In May, Montauk Juice Factory Inc., the parent company of The End, filed a trademark infringement lawsuit against Starbucks, demanding $10 million in damages and asserting that the rainbow beverage that Starbucks launched in April was a copycat of the colorful “Unicorn Latte” that the shop started selling last year.

The End’s “Unicorn Latte” was formulated in conjunction with Montauk Juice Factory. The two invested more than six months into the development of the beverage. According to the complaint, “[d]espite the distinctive name, the Unicorn Latte contained no coffee or milk and was instead a freshly-made blended beverage containing fresh ingredients such as cold-pressed ginger, lemon juice, dates, cashews, blended with additional healthy, dried ingredients such as maca root, blue-green algae, and vanilla bean.”

Within a month of its release, The End’s “Unicorn Latte” began appearing in articles published by both traditional and online media outlets, including both the New York Times and the Huffington Post. The End states that “[t]he press, coupled with advertising efforts and broad social media exposure on Facebook and Instagram (via the hashtag #unicornlatte), made the Unicorn Latte name and product famous.”

As for the Starbucks “Unicorn Frappuccino,” it lacks any indication of being healthy. The recipe calls for a crème based Frappuccino with mango syrup, colored with unicorn pink powder, blue drizzle made from white mocha sauce, classic simple syrup, and sour unicorn blue powder. The drink is then topped with whipped cream and sprinkled with a blue and pink unicorn dust.

The End believes that Starbucks released its unicorn-themed drink to overshadow their own. As per the complaint, “Starbucks’ massive and public launch of the Unicorn Frappuccino . . . meant that its product became the dominant ‘Unicorn’ beverage overnight . . . This, in turn, immediately caused consumer confusion whereby customers began referring to Starbucks’ product as a ‘Unicorn Latte,’ began assuming that [The End’s] product was a copy-cat or knockoff, and began asking employees at The End to serve them a ‘Unicorn Frappuccino.’” As a result, The End feels that consumers were misled to believe that it was copying Starbucks, ultimately causing irreparable damage to The End’s reputation and claim to fame.

Starbucks said the claims were “without merit.” Yet, on August 22, 2017, a one-page filing in the U.S. District Court for the Eastern District on New York revealed that the companies have agreed to settle their trademark dispute. Starbucks released a statement saying the action has been “amicably resolved on confidential terms.” A lawyer for Montauk Juice said the parties were “pleased to be able to move on.” While the court documents do not specify a settlement amount, the record shows that each party will pay their own costs and noted prejudice against the Defendant, Starbucks. As such, the agreement stipulates that The End has agreed not to sue Starbucks over any unicorn related drinks in the future.