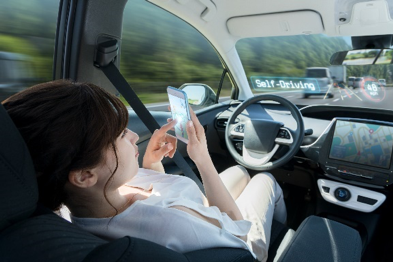 Technology in cars has come a long way, especially with the innovation of self-driving vehicles.  The first car was not even close to being capable of this.  Even though Karl Benz, a German inventor, was given credit for inventing the first car in 1885, historians have claimed that other cars were invented as early as the 1600s.  One reason Benz took given credit for inventing the first car was because it was the first practical car which featured a gasoline powered engine, and it was the most efficient engine compared to others at the time.  The technology was eventually put into mass production, which made it affordable and accessible to many people around the world. The advancement of cars did not end there, as all cars at that time required a driver behind the wheel.  The concept of having a driverless car began to develop quickly after.

The first step towards autonomous vehicles was in 1925, when Francis Houdina demonstrated a radio-controlled car that drove through the streets of Manhattan.  Nobody was behind the steering wheel, and the radio-controlled vehicle was able to start its own engine, shift gears, and sound the horn.  Someone was still controlling the vehicle, so it was not truly autonomous.  Fifty years later, John McCarthy, one of the founding fathers of artificial intelligence, described in an essay, the idea of a car being capable of driving itself, just as a human driver would.  All a person would have to do is enter a destination and the car would drive them there without assistance.  It was after this time that the technology for a truly autonomous car began to develop.

In 2000, self-parking cars began to emerge, showing the potential for a completely autonomous car.  In 2009, the feature entered the mass market, as major car manufacturers offered cars that could parallel park themselves.  The advancement continued, and in 2013 major car companies such as Ford, Mercedes Benz, BMW, and Tesla worked on self-driving car technologies.  Even though the idea of a self-driving car can be exciting, there is always a level of risk associated with new technology. The first autonomous car fatality occurred in Florida when a self-driving car hit another human driven vehicle.  The self-driving car failed to apply the brakes in time after the vehicles turned in front of it, and the impact resulted in a fatality.  When human mortality is involved, major steps must be taken to prevent future injury or death.

The deaths involving autonomous vehicles have led to a nation-wide review of current laws in this area.  Before autonomous vehicles, only laws regarding human drivers existed.  With the advancement of car technology towards autonomous cars, the laws for such technology were struggling to keep up. California did, however, expand its testing rules which requires a remote operator be able to control the vehicle. California’s Department of Motor Vehicles requires a safety driver to be able to take control of the autonomous car, preventing the car from being truly autonomous.  In 2018, California laws appeared to hinder truly autonomous driving, but car manufacturers were still able to develop and test their cars in Arizona at that time.  Arizona had no laws regulating this technology, yet.  However, no car manufacturer took advantage of the state at the time because developers wanted to convince themselves, along with the public, that the technology for autonomous cars was safe and reliable in all conditions.  They wanted to show that autonomous car technology would eventually be safer than human drivers.

As technology continues to develop at an accelerated rate, the laws have been gradually introduced.  In 2012, many states considered legislation regarding autonomous vehicles.  Due to the proliferation of this technology, the legislatures were forced to shift gears and consider new rules and regulations to promote innovative safety standards, which relate to safety testing involving autonomous cars.  Current laws that govern autonomous cars can be very complex, but no state made the use of the cars illegal.  Completely autonomous cars are available today, and many state legislatures are still catching up to enact and enforce safety regulations to keep up with this advancement.  States that have laws regarding autonomous cars are not consistent with each other, and users of the cars must be aware of each state’s manuals, codes, and handbooks. The U.S. Department of Transportation has yet to enact a nationwide policy regarding self-driving cars.

Forecasts indicate that over the next decade, autonomous cars will become almost as common as cruise control is today.  There could be over 21 million autonomous cars in the United States alone. Creating effective policies or regulations to control autonomous cars is a challenge, and in 2018 the House of Representatives passed autonomous vehicle legislation H.R. 3388 to create a uniform standard.  As legislatures struggle to keep up with regulating autonomous cars, even more innovative technology could be developing.  As no one is truly sure how the car landscape will develop down the road, it is unclear on how the car industry and the regulations of the roads will be affected in the near future.

Rick Spence, Everything you need to know about the future of self-driving cars, MaClean’s(July 11, 2019), https://www.macleans.ca/society/technology/the-future-of-self-driving-cars/.