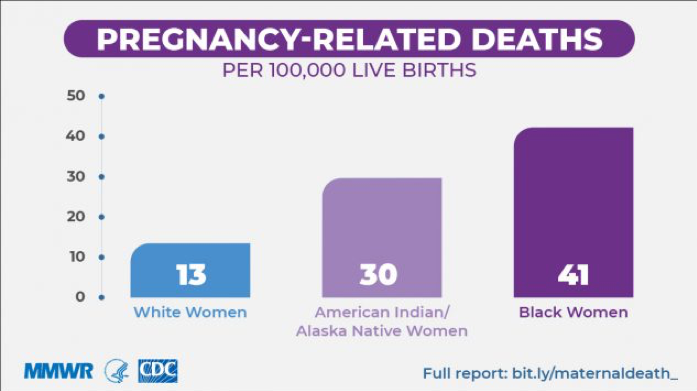 “Let me be clear: everymother, regardless of race or background, deserves to have a healthy pregnancy and childbirth,” tennis star Serena Williams said in a Facebook post speaking to the racial disparities and bias present in maternal healthcare, following her Vogue cover story where she opened up about her own personal experience. “I personally want all women of all colors to have the best experience they can have.” For the numerous fatal obstetric outcomes resulting from childbirth, there exist clear disparities across racial groups. In 2019, the Centers for Disease Control and Prevention (‘CDC’) reported that Black, Native American, and Alaska Native women are approximately three times more likely to die from pregnancy-related causes than White women.

On December 21, 2018, the Preventing Maternal Deaths Act (H.R. 1318) was signed into law, allowing for the allocation of resources to collect and analyze data on every maternal death in the country. Through this bill, the Federal Government intends to use funds for the establishment and support of existing maternal mortality review committees (‘MMRCs’) in states and tribal nations across the United States. These committees collect data and recommend preventive measures to be taken during the prenatal and postpartum stages. Principal Deputy Director of the CDC, Dr. Ann Schuchat, said: “The bottom line is that too many women are dying [from] largely preventable deaths associated with their pregnancy…we have the means to identify and close gaps in the care they receive, we can and should do more.”

Maternal health amongst black women has garnered much attention in recent years as more data became available. Of the approximate 3.8 million births each year, there are an estimated 700 pregnancy-related deaths. The CDC has reported that while 13 white women die per every 100,000 live births, the figure increases to 42.8 for Black women, and 32.5 for Native American/Alaska Natives women.  These statistics have prompted the Federal government to take action to ensure that there are closer studies of the information available and a dramatic reduction in these figures for women, particularly those for women of color. Though the reasons for the differences remain unclear, the passing of H.R. 1318 was a good step in the right direction.

Current and former presidential candidates have also made it a priority to shed light on this issue, with Senator Kamala Harris even proposing new legislation in her fight against maternal mortality. A reduction in cognitive implicit biases by healthcare providers and a call for improvement facilities through the care provided in the disproportionately affected communities may lead to a better result in the years to come. It is saddening that in one of the leading countries of the world, there exists a reality where black women from all socioeconomic statuses and the death rate for black infants exponentially surpasses that of non-Hispanic white women. Healthcare for all women must be a priority, especially in one of the most precious and vulnerable times of their lives.