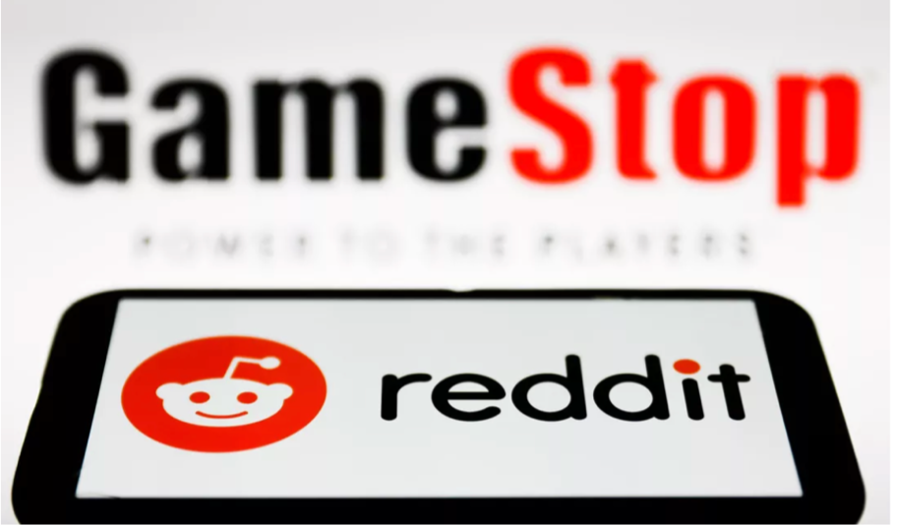 In recent weeks, GameStop (GME), a company that sells video games in store, saw its stock prices skyrocket to nearly 1,700%.[1] The increased stock price left many to wonder how this could happen, especially for a company that has been struggling during a pandemic that has forced many to stay home.

Seeing that GameStop was failing, big Wall Street investors began betting heavily against the company months ago in anticipation for the company’s failure.[2] This technique is called short selling, which is a way to invest so you can attempt to profit as stocks decline. [3] A short seller borrows stock from a broker and sells into the market with hopes to buy back the stock at a cheaper price.[4] This allows for profiting off of the difference in prices. Many have learned to buy low and sell when the stock is high. However, when you short a stock, it flips the order allowing you to sell high and buy the stocks low.[5]

Months ago, members of a popular stock market discussion board on the app, Reddit, started encouraging others to invest in the company with the hope that big investors were betting that the company was doomed. Eventually, as the Reddit movement grew, the rising stock price started troubling large investors who had bet against its success. [6]

As we rang in 2021, GameStop’s shares were already inconsistent sliding from $17 to $483 by the last week of January.[7] Some proponents of the movement believe that this not the end for GameStop.[8] Some generations grew up in an era where queuing outside GameStop waiting for the next big game was the norm. Some have been unable to part with the company based on the memory they have stored. Others in the movement are looking to make large sums of money fast.

After the markets soared, Robinhood, a zero-commission online broker app, restricted purchases of GameStop and other stocks that have been affected by Reddit.[9] Robinhood claiming that their decision came after markets had “become a voice for the voiceless” as well as a “risk management” decision, showing their sympathy to both sides of the movement.[10] This restriction came shortly after the Securities and Exchange Commission (SEC) stated that it was monitoring the market volatility.[11]

Another statement was released by Robinhood explaining that the company “makes changes where necessary” and emphasizing that users can still sell their shares, they just cannot buy more. Many Robinhood users are left confused and wondering whether or not this is legal. At least one class action lawsuit has already been filed in response to the Robinhood freeze.[12]

The lawsuit was filed in the Southern District of New York alleging that the app “purposefully willfully, and knowingly removed the stock ‘GME’ from its trading platform in the midst of an unprecedented stock rise, thereby depriving retail investors of the ability to invest in the open-market and manipulating the open market.”[13] Robinhood, which prides itself on “democratizing finance for all,” has been blasted by the Alexander Cabeceiras, the who filed the suit. He took to Twitter on January 28th, 2021, tweeting that their mission statement is “simply not true.” Plaintiffs are seeking a reinstatement of $GME trading to the platform, a class action fee for the plaintiffs, attorneys’ fees, and punitive damages.

Democratic Senator Sherrod Brown, of Ohio, held a hearing to address the current state of the market.[14] During the hearing, he stated, “people on Wall Street only care about the rules when they’re the ones getting hurt. American workers have known for years the Wall Street system is broken.”[15] He calls upon the SEC and Congress to make the economy a place for everyone, not just the big shots on Wall Street.[16] In the U.S. House of Representatives, Maxine Waters, said they planned to hold a hearing to look into the short telling and other stock market practices that have overwhelmed the news outlets.[17] Other members of Congress have also asked for an investigation into Robinhood.

As of February 4th, 2021, GameStop’s stocks are down 85% from January 28th when they were at $483 apiece. At the closing on Wednesday, February 3rd, 2021, the stock plummeted to $92.[18] How this movement over GameStop ends is unknown, big Wall Street investors, as well as everyday, people are still monitoring the stocks. Regardless of what side you are on, it is agreed that this is a learning lesson and shows the power social media has in the digital age.[19]

To end on a positive note, Hunter Kan, a student at Cornell, cashed out at almost $30,000 in GameStop Stock.[20] He took part in the movement to prove “the big boys on Wall Street” wrong.[21] Instead of keeping all of his profits, he decided to donate a portion of his funds to help kids at Children’s Minnesota Hospital. His closing quote shows his generosity, “there is no group of people more deserving of receiving a bunch of video games than some kids going through a hard time.” [22]

[3]  James Royal, Short selling: Betting that a stock price will fall and why it can be risky, Investing, Bankrate, (Jan. 26, 2021), https://www.bankrate.com/investing/short-selling-stocks/.

[7] Ian Sherr, GameStop stock crashed but Reddit still wants to send it to the moon. How and what’s next, Personal Finance, CNET, (Feb. 4, 2021, 4:45 AM), https://www.cnet.com/personal-finance/gamestop-stock-crashed-but-reddit-still-wants-to-send-it-to-the-moon-how-and-whats-next/.

[9] Taylor Tepper, The Lesson of GameStop: Investing Is Not a Game, Advisor, Investing, Forbes, (Feb. 3, 2021, 11:57 AM), https://www.forbes.com/advisor/investing/gamestop-investing-lessons/.