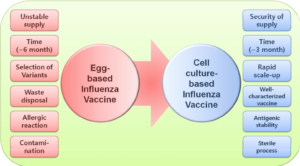 Influenza impacts millions of people across the world each year. According to the World Health Organization, there are 3-5 million cases of influenza with 290,000-650,000 attributable deaths each year. What makes influenza different from most viruses is the fact that it rapidly changes in shape and form due to genetic mutations. As a result, the medical community is faced with continually having to modify influenza vaccines to combat different strains of the virus each year. The predominant influenza vaccine currently on the market is produced by propagating a weakened virus in chicken eggs. Although this production method is widely approved and considered safe, it presents several challenges. First, the egg-based method is highly dependent on a supply of vaccine-quality eggs. In the case of an unforeseen event, such as avian flu, the supply of these eggs can be at risk of serious shortage. Second, the egg-based production method is very time consuming due to various processing steps. And third, because of the inherent egg usage, the current prevailing vaccine cannot be administered to people who have egg or feather allergies.
Two FDA-approved non-egg-based flu vaccines, developed by Protein Sciences (now Sanofi) and Seqirus, show strong potential as alternative vaccines that are quicker to produce, more risk-averse, and available to a wider patient base. The Sanofi vaccine is produced by a method that involves propagating the influenza virus in an insect cell line known as SF9, while the Seqirus design is propagated in canine cells. Studies have shown that the effectiveness of these cell-based vaccines can be 10-11% higher than egg-based vaccines in preventing hospital encounters, inpatient stays, and clinic visits. While production time for the cell-based vaccines have been proven to be as much as 50% shorter than the prevailing egg-based method. If past flu pandemics have taught us anything, it is the importance of speed and efficacy when it comes to flu vaccine production. In addition to the decrease in production time and increase in effectiveness of the vaccines, the reliability in production far exceeds that of the egg-based design. The cell-based vaccines are not reliant on production materials subject to variation, such as eggs or antibiotics, allowing the cell-based vaccines to be produced on a consistent basis for all users.
The disadvantages of the cell-based vaccine compared with their egg-based counterpart are essentially twofold: regulatory hurdles and cost of goods. However, the regulatory hurdles have become less of a barrier in recent years as the Sequris vaccine, Flucelvax Quadrivalent, was approved by the FDA in 2016, and Sanofi quickly followed with FDA approval on Flublok. These approvals show that the high initial regulatory burden of showing the vaccine’s safety has already been met, allowing further development to meet specified regulations as well. Although cell-based production costs remain higher than the egg-based vaccine, under the cell-based production system there is far greater potential for multi-vaccine application of the production system due to the sterile disposable nature of the process. Currently, the egg-based production design only supports significant commercial manufacture of influenza and yellow fever vaccines, whereas the cell-based design could allow for many different vaccines to be produced using the same system. In turn, this diversified use of the production system could increase the yield of total vaccines that the cell-based design can produce, offsetting the expensive nature of the system.
Accounting for all these factors, it may be time to consider cell-based vaccines as the new norm in the influenza vaccine community. If the benefits are there, and the obstacles are beginning to wane, it may soon be that convention is the only thing keeping egg-based production methods prevalent.